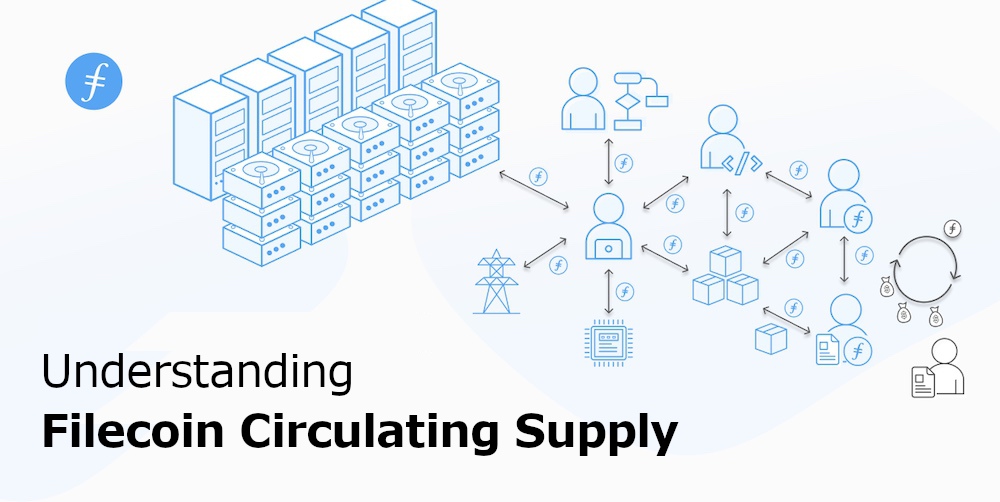 This blog post aims to unpack how Filecoin tokens enter circulating supply, provide more insights on how various stakeholders take part in its economy, and shed light on how one should approach and think about Filecoin token economics. This post should be paired by reading the paper on Filecoin’s Economy and the detailed mechanisms outlined in the Filecoin Spec.

The growing momentum in the Filecoin ecosystem is a primary driver of use cases, tooling, and infrastructure for all Filecoin stakeholders. Since the release of Filecoin’s mainnet on October 15th, 2020, the network has now surpassed a number of important milestones:

For more, here’s a deep dive on the state of the Filecoin Ecosystem from Liftoff Week or a recent recap of the network from October 2020.

Filecoin as a Utility Token

Filecoin is a utility token that is meant to be used, giving token holders a right to use the network. One can think of Filecoin as an Island Economy where participants come together to produce valuable storage goods and services and export them to the world. On the network, one should expect to see storage providers with their own unique characteristics, smart contracts systems, lending services, a diverse set of use cases and many more. Each of these could become their own unique business. The utility of the network is reflected in the attractiveness of those goods and services that participants produce in the network.

The overarching goal for the whole economy, across miners, developers, researchers, clients, and token holders is to efficiently produce attractive storage-related goods and services that can be exported to the outside world. An economy producing more valuable goods more efficiently will lead to more demand for the goods and more demand for the networkʼs token. An increase in the purchasing power of the participants within the economy will allow them to expand and improve their operations to provide an even better, cheaper service to the world. 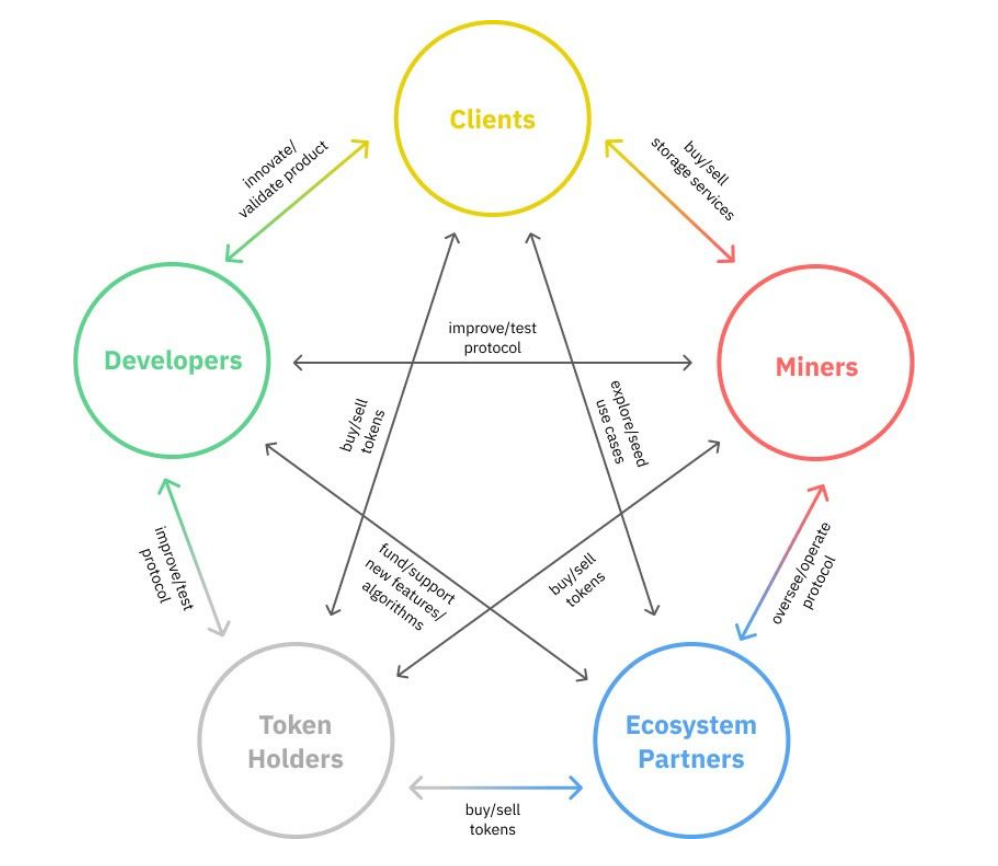 As a utility token that aligns participants’ incentives with the long-term goal and vision of the network, Filecoin minting is aligned with the overall provable utility of the network. This means that the majority of Filecoin supply would only be minted if the network achieved some ambitious growth and utility targets.

Unlike most other blockchain networks, Filecoin has innovatively adopted a dual minting model: Simple and Baseline:

As such, effective token minting from mining is in the hands of the community and falls anywhere between the two lines in Figure 1. Figure 2 provides a sense of how much the network needs to grow to hit maximum minting. While the community may come together to update the baseline of the network, hitting the baseline requires competitive collaboration among all stakeholders, researchers, miners, developers, token holders, ecosystem partners, and storage clients.

More information can be found in the Filecoin spec.

Another core principle and mechanism that incentivizes long-term alignment, steers participants away from short-term speculation, and encourages all stakeholders to work together to make the Filecoin network more useful in the long-term includes stakeholder vesting.

This applies to each of Filecoin’s core stakeholders, including:

These long-term vesting schedules for token holders help ensure that participants have skin-in-the-game, and take long-term views with respect to their actions on the network.

Naturally, the amount of Filecoin tokens that are locked in collateral and slashed for misbehavior is in the hands of the community:

Filecoin is a global marketplace enabled by blockchain technologies. Without a reliable way to algorithmically distinguish real useful data from generated randomness, the Filecoin Network innovatively and pragmatically introduced a layer of social trust on top of the technical layer, Filecoin Plus. Filecoin Plus puts power in the hands of the storage clients as miners storing deals from these clients, who are notarized by a network of notaries, gain a 10x advantage in storage power and hence 10x their share of the network’s block reward.

This mechanism incentivizes all participants to invest in business development, recruit useful data and use cases, and make Filecoin more useful. When a miner earns 10x the share of the block reward, they are also required to put up 10x the collateral with 10x the penalty to ensure that the incentives are aligned. This is also a big step forward in community governance and decentralized cryptoeconomics as operations and processes are being shaped by the community in public.

As long as there is any action or utility on the network, Filecoin tokens will be consumed to compensate for the computation and storage resources on-chain messages consume. Similar to the rate of token minting for miners, the rate of token consumption is also in the hands of the community, as participants compete for on-chain resources.

As of today, Filecoin daily token consumption has climbed as high as 180k FIL per day, which is a sign of a thriving economy.

The economic mechanisms embedded in the Filecoin protocol ensure that network activities and stakeholders are fully aligned with the long-term health of the network. Mechanisms such as variable minting based on network growth, vesting structures, token consumption, collateral requirements and more align participant incentives and motivations with the long-term success of the network.

Making Web3 mainstream requires the efforts of all ecosystem participants. The incentives of the Filecoin protocol have to balance the interests of all stakeholders, storage clients, miners, developers, token holders, and ecosystem partners. A thriving economy benefits everyone in the network and aligns the long-term incentives of all participants. And most importantly, the future of Filecoin lies in the hands of all its community.

The reference implementation of the Filecoin protocol (Lotus) exposes an API call for the current network circulating supply: StateCirculatingSupply. This API call returns the circulating supply as a result of subtracting total token outflows from total token inflows. Total token inflows include mining rewards, vested SAFT tokens, disbursed Mining Reserve, and vested tokens originally owned by the Filecoin Foundation and Protocol Labs. Total token outflows include tokens programmatically locked on chain or programmatically burned that are not transferable at the time of invocation. For example, collateral, locked block rewards, not-yet-vested tokens, etc are not included in this calculation. This API is used by a variety of community members, including various Filecoin block explorers.

While Filecoin had implemented only API #1 at launch, the network is implementing a second API (“API #2”) to accommodate the definition used by these cryptocurrency price and market capitalization tracking websites. To reiterate the difference, API #1 includes all vested tokens from the Filecoin Foundation, Protocol Labs, and project team members in circulating supply and API #2 excludes those tokens until they leave their original wallets at which point they become part of the circulating supply. As such, the Filecoin circulating supply as defined by cryptocurrency price and market capitalization websites may sometimes be lower than what the native Filecoin Protocol API returns.

As of December 14, 2020, API #1 yields a circulating supply of 54M FIL while API #2 would yield 31M FIL. Certain cryptocurrency price and market capitalization tracking websites had previously used Filecoin’s API #1 formula, and will in the future switch to using API #2 with a different formula. In order to ensure a smooth transition as those websites switch from the first formula to the second formula, we have paused the circulating supply figure on the API that those particular websites are using (at around 44 million FIL) until the number calculated for API #2 reaches that number, at which point those websites will use the API #2 formula going forward.

Members of the community may use each of the different APIs / formulas for calculating circulating supply for particular purposes. For example, Lotus will use API #1 in order to execute various protocol level calculations. Other cryptoasset tracking websites will use API #2 in order to ensure comparability against the calculations used to calculate circulating supply for other crypto networks. Both options will be freely available for the community to leverage and use.