The importance of multiple implementations

As we first mentioned in this blog post, launching the Filecoin network with multiple implementations is a key part of our network security strategy. Having multiple software implementations that interoperate on the same network reduces the risk that a significant bug in one implementation rears its head and takes down the entire network.

Additionally, the success of any open source project – such as Filecoin – rests on a strong community that is collectively involved in building and stewarding the project. Ultimately, Protocol Labs will be just one of many parties devoting their energy, talent, and resources to making Filecoin an important building block of the internet’s evolving infrastructure. We are very excited to see the exceptional teams of ChainSafe and Soramitsu building implementations and providing more security to the broader Filecoin ecosystem.

Today, there are four full node implementations of the Filecoin protocol in progress. This is a huge step forward for increasing Filecoin network security and growing the Filecoin ecosystem! 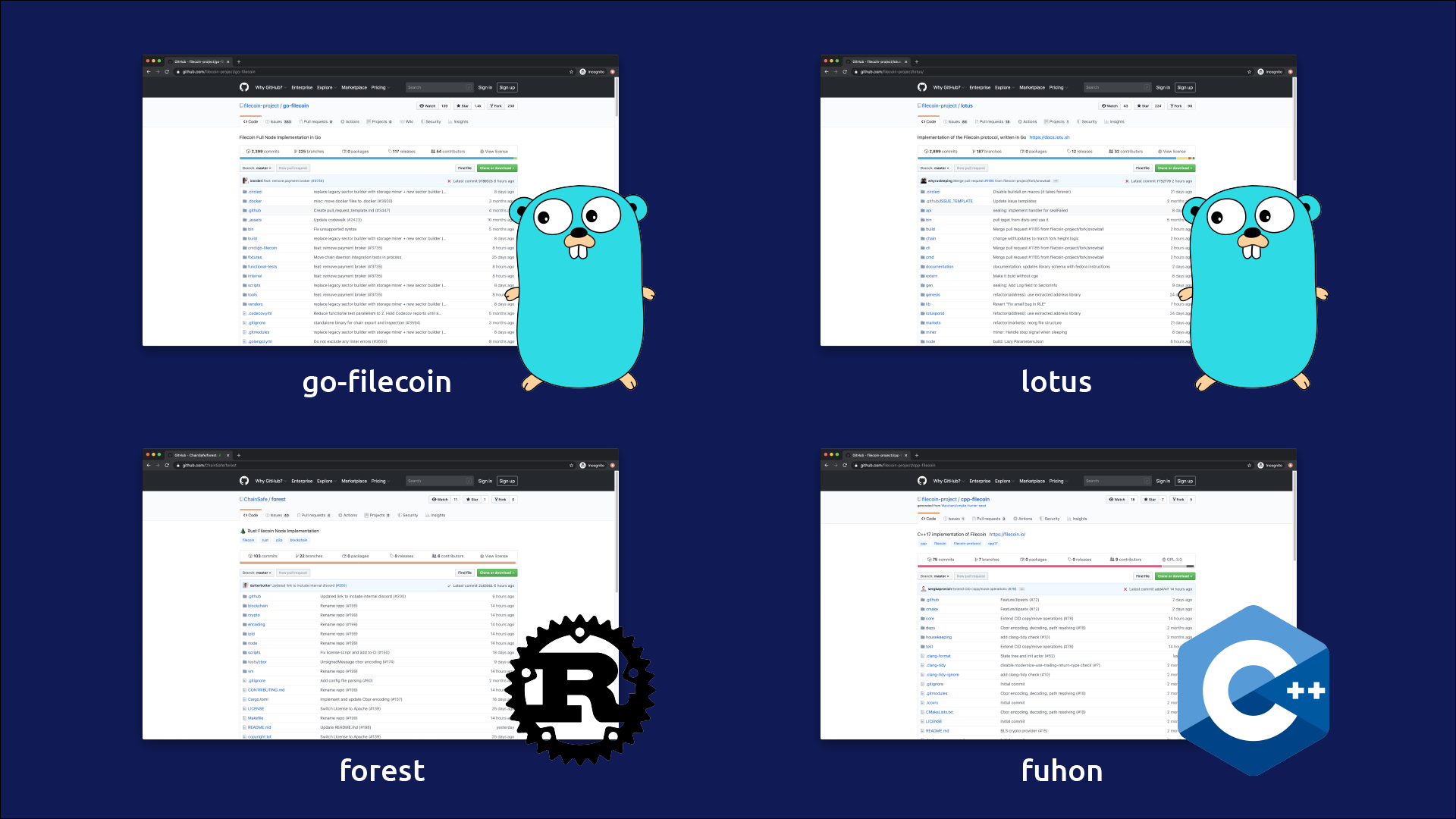 While the four Filecoin implementations are not yet feature-complete, they are getting really close. As published in our most recent roadmap update, we are aiming for network interoperability between lotus and go-filecoin within the next few weeks. Interoperability with fuhon and forest will follow shortly afterwards. In the meantime, you can follow each implementation’s progress at its respective repo on GitHub:

About ChainSafe and Soramitsu

For our first batch of implementation grants, we chose to partner with ChainSafe and Soramitsu because of these teams’ core alignment with the mission and values of the web3 space and their deep experience with implementing complex blockchains. We are excited to have these exemplary teams contributing to the Filecoin ecosystem!

ChainSafe Systems is a blockchain R&D firm that is building infrastructure for Web3. ChainSafe started several years ago as a group of developers who met at early Ethereum meetups. Ever since, the team has been building in the Ethereum, Ethereum Classic, Cosmos, Polkadot, and now Filecoin ecosystems. In addition to the Rust Filecoin implementation, ChainSafe is building Ethereum 2.0 and Polkadot protocol implementations. You can read more about the team and their Rust implementation of Filecoin here.

Soramitsu is a boutique Japanese fintech company with expertise creating blockchain-based infrastructure, payment systems, and identity solutions. The Soramitsu team has deep experience building enterprise-grade fintech systems; this commitment to robustness and high software quality is especially important when building software rockets (e.g. blockchains). In addition to the C++ Filecoin implementation, Soramitsu is currently building a Polkadot implementation in C++ and is also the lead maintainer of the C++ implementation of libp2p.

We are always looking for mission-aligned partners to collaborate with as we grow the Filecoin ecosystem. If you already have an idea for something to build or want to check out our open RFPs, apply to the Filecoin DevGrants program! If you’re interested in brainstorming and learning more about ways to get involved, kick off a thread at https://discuss.filecoin.io/.

As always, thank you for your continued support. We look forward to building with you!

One of Filecoin’s launch goals has always been to have multiple independent protocol implementations to help secure the network at launch.

One of our most important goals is to make the Filecoin mainnet as secure and resilient as possible. One part of our network security strategy is launching the Filecoin network with multiple implementations. Today, we are delighted to announce lotus, our first alternate Filecoin implementation.

A Guide to Filecoin Storage Mining

An updated guide to Filecoin storage mining, and discuss some of the recently announced incentives and opportunities for members of the growing Filecoin community.