On top of the Filecoin protocol, app developers and service providers are building easy-to-use end-user tools for file storage and sharing. One of the most exciting projects to be borne out of this wave of growth and innovation is Slate, an open-source storage system built on top of Filecoin. Slate is the first storage application designed to encourage collaboration and research across a distributed network.

Slate’s creation is a first step toward enabling a thriving network for data storage and transactions powered by IPFS, Filecoin, and Textile that is open and usable for everyone. Over the last 8 months, a team of more than a dozen engineers, designers and developers have worked together to make Slate a reality. And in its September 2020 launch, the app has already onboarded 200GiB of real user data.

We checked in with Slate Founder Jimmy Lee on the state of the project since Filecoin Mainnet Launch.

What was October like for you and your team? How successful was Slate when the Filecoin Mainnet launched?

Jimmy Lee: During the Filecoin Liftoff week in October 2020, Slate was making so many Filecoin storage deals that the deal brokers and workers temporarily overwhelmed the network! We were making up to one thousand deals within 30 minutes. It was mind-blowing.

Today we’re witnessing a massive amount of improvements to Lotus that will allow us to kick off our deal making machine again in 2021 and participate in this incredible network. We want Slate to be the easiest way to make Storage deals against the Filecoin Network.

We’re proud to work alongside the Filecoin Network team and build an attractive platform where people can be onboarded to the concept of decentralized file storage. We are excited in upcoming months to introduce more people to OSS, and prove the services are just as powerful as their enterprise counterparts. We believe people want to know how their tools work, and Slate is a perfect example of that. You can use the protocols that honor your values instead of corporations with an opaque process.

Sounds like Mainnet Launch was great for Slate! What upgrades have you been making to the project since then?

JL: At the end of October, we introduced Slate 2.0. We reworked our layout engine to make Slate web pages even more flexible for collecting, organizing, and sharing files. The team also added awesome new tools to give you more control over the look and feel of our Slate. These tools let you resize, re-order, and even overlap images. It’s as easy as hitting the edit button and taking Slate 2.0 for a spin! Then, we added some quick actions to files to make it even easier to connect files to slates from anywhere on the network.

In November, we set our sights on search, making it easier to search slates with a single keystroke. Now you can seamlessly navigate between files, slate web pages, and user profiles. And you can more easily discover what others are putting on the network.

To date we have more than 4,800 users and 23,000 public file uploads on Slate. The growth is just amazing! And we passed 312 stars and 18 contributors to the project. The goal of Slate was always to be open source, unlike centraled cloud storage options like Dropbox, Pinterest, or other enterprise businesses. We want everyone to be able to see all of the bones of our software and be able to make their own.

What more can you tell us about the people and teams using Slate?

JL: There are so many different use cases from pdfs to videos. One of my favorite recent developments is the Unity WebGL Integration, which really opens up the doors for what is possible on the platform. This is part of the promise of Slate, applications that everyone can share and work on together.

Overall, it’s been really awesome to see what some of our 17 contributors are doing outside of the core team. For example, Tara Lin from the Slate team did an incredible job creating new marketing pages.

And the response for the community has been amazing too! Here’s a look at some love we’re receiving on Twitter. 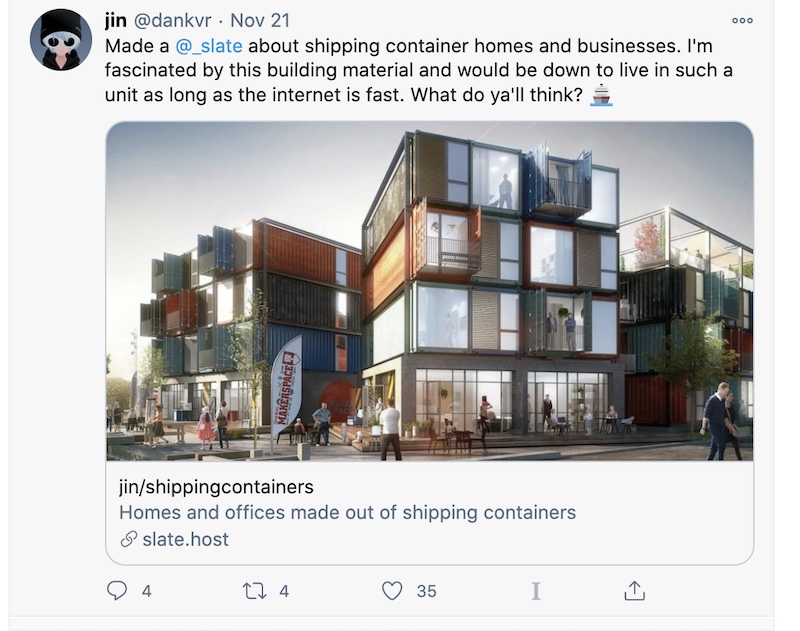 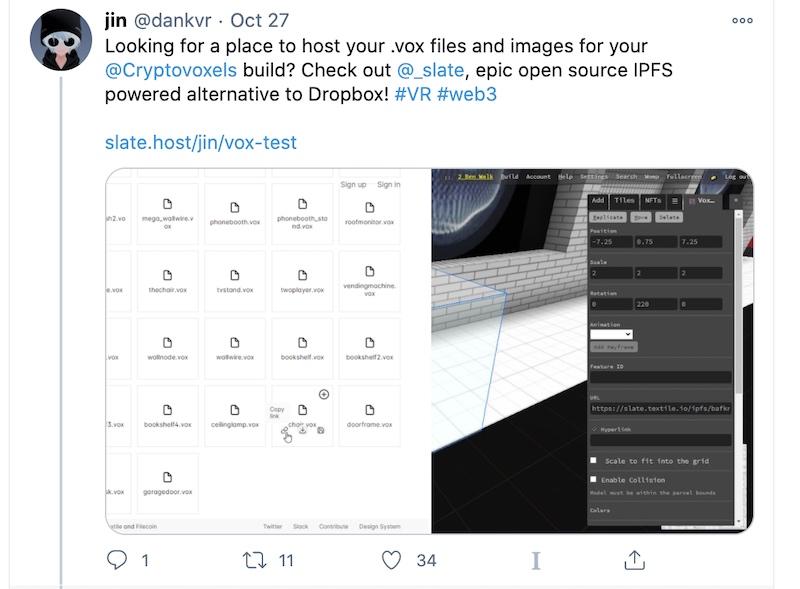 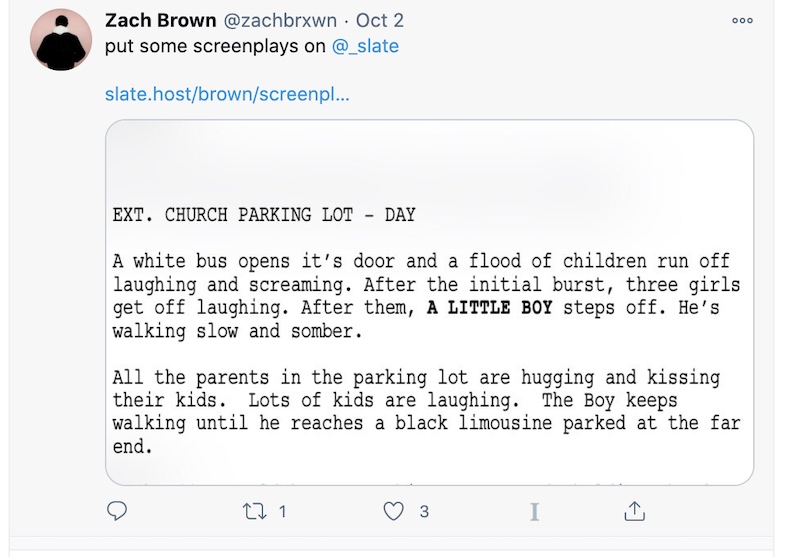 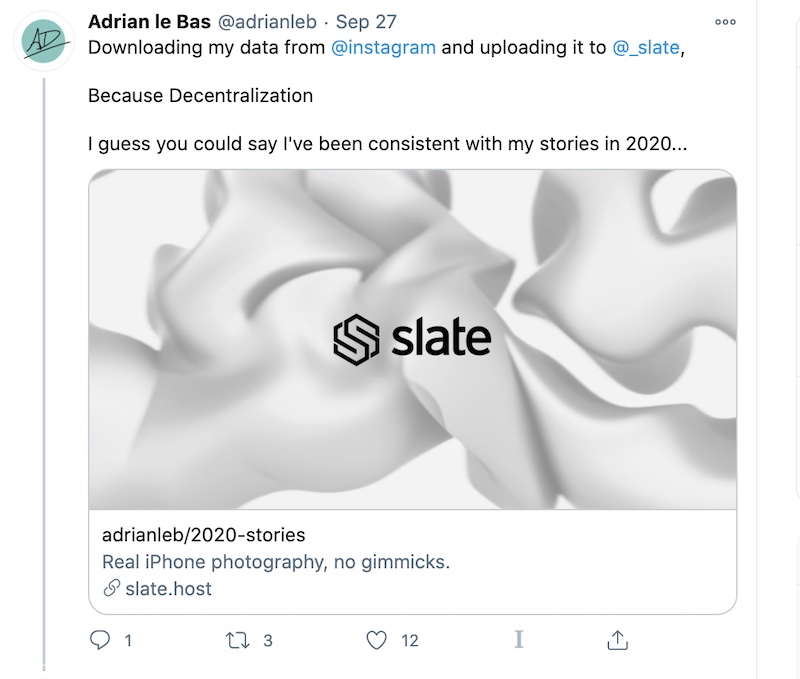 Incredible. Tell us more about what’s next for Slate!

JL: We really care about the Filecoin Retrieval Market. We are working with the team at Textile to make sure we can load an entire IPFS block store into a Textile Bucket. Just imagine, you’ll be able to create a wonderful world of your files on Slate, and then store it on the Filecoin Network for anyone to retrieve. And when they retrieve it, it will appear just as you designed it!

We really care about not requiring authentication to use Slate, so we’re adding libp2p authentication. As long as you have a libp2p you’ll be able to use Slate as an interface. And we’re looking to collaborate with more teams and integrate more of their APIs such as Infinite Scroll, Space Storage, and Infura (let us know when you’re ready for us, teams!).