How storage and retrieval deals work on Filecoin

This blog post explains how Filecoin deals work from the perspective of both the storage providers (also known as miners) and the clients who want to store data on the Filecoin network.

The technical explanations in this post use the JSON-RPC API to interact with the Filecoin network when querying for data. This API is mostly used by applications. As a human, you can use the user friendly lotus command line tool, which uses the JSON-RPC API under the hood.

The Filecoin network achieves economies of scale by allowing anyone to participate as a storage provider. Currently the network is made up of hundreds of storage providers spread across the globe. Content addressing and cryptographic storage proofs verify that data is being stored correctly and securely over time on miners’ hardware, which creates a robust and reliable service.

This blog post covers the basic stages of the two types of deals in Filecoin, namely storage deals and retrieval deals, and details their lifecycle. The cryptographic proofs used to verify that participants in the system are performing their responsibilities according to their commitments are also explained.

Importing data locally to a Filecoin node can be done with the lotus client import command. It’s important to remember the resulting data CID (it is also available on the local node later on), because it must be used to later retrieve data from miners.

After importing data into the local node, users have to initiate a deal. This can be done with the lotus client deal command. The command takes a data CID as input, produces a Filecoin Piece, and interactively takes the user through the storage deal flow detailed below. 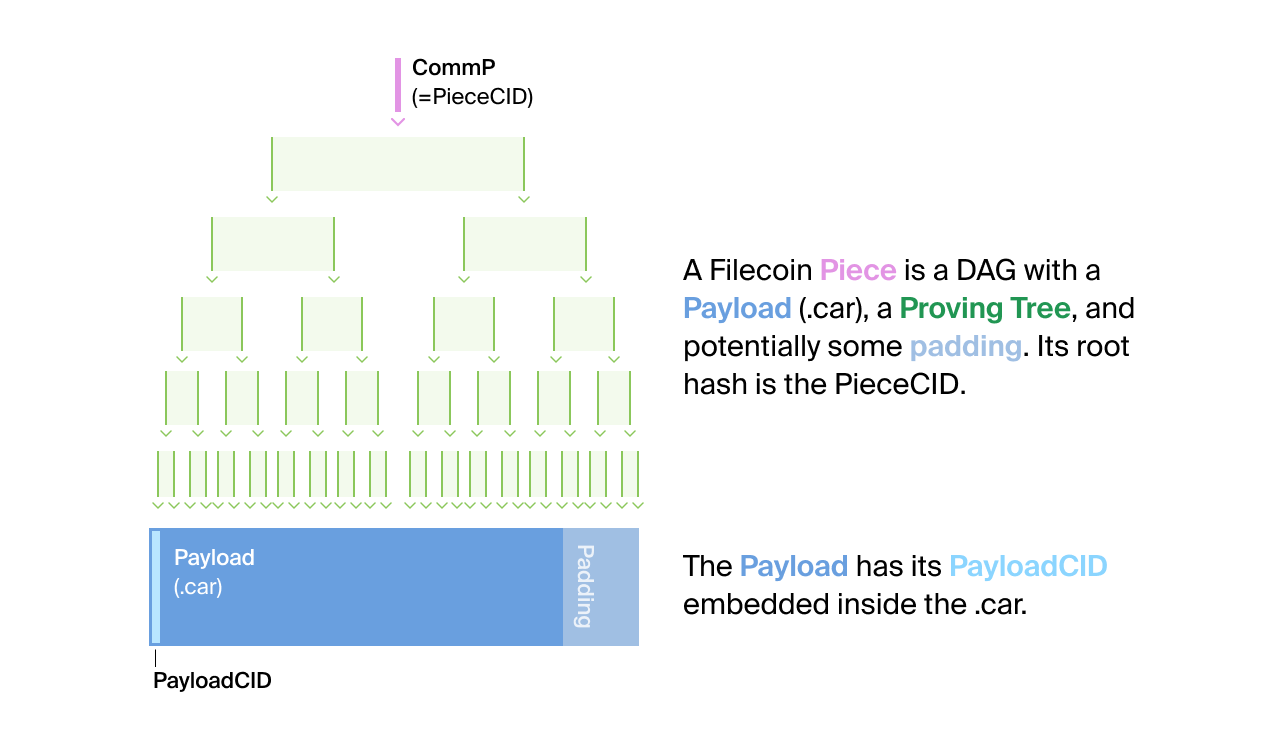 A Filecoin Piece is a CAR file containing an IPLD DAG with its own data/payload CID and piece CID.

CAR stands for Content Addressable aRchives - a CAR file is a serialised representation of any IPLD DAG as the concatenation of its blocks, plus a header describing the graph in the file (with the root CID).

When a client wants to store a file in the Filecoin network, they start by producing the IPLD DAG of the file with UnixFS (this is what the lotus client import command does). The hash that represents the root node of the DAG is an IPFS-style CID, called data/payload CID.

UnixFS is a protobuf-based format for describing files, directories, and symlinks in IPFS. UnixFS is used in Filecoin as a file formatting guideline for files submitted to the Filecoin network.

The resulting CAR file is padded with extra zero bits in order for the file to make a binary merkle tree.

Users can store data in and retrieve data from the Filecoin network via deals. Participants in the network, miners (supply-side) and clients (demand-side), interact with each other via storage deals and retrieval deals.

The lifecycle of a storage deal is as follows:

The client identifies miners and determines their current asks, i.e. the price per GiB per epoch (30sec.) in attoFIL (1 attoFIL is equal to 10^-18 * FIL) that miners want to receive in order to accept a deal. Currently a deal in Filecoin has a minimum duration of 180 days.

You can list all currently active miners by querying the JSON RPC API of a synced node (for test purposes the https://api.node.glif.io public endpoint is used), with the Filecoin.StateListMiners method:

You might want to decide on a specific provider based on their reputation or power in the network. Reputation metrics for miners are not part of the Filecoin protocol yet, and not covered in this post.

Once you have chosen a specific miner, you need to fetch its PeerID, for example with the Filecoin.StateMinerInfo method, to establish a secure connection to them via libp2p protocol:

You can then query for a signed StorageAsk with the Filecoin.ClientQueryAsk method. This will establish a direct libp2p connection to the selected miner, and ask for a storage quote:

The result includes details about deals that this miner is willing to accept, such as range for the admitted Filecoin Piece sizes and price per GiB per epoch. Note that making a storage deal proposal which matches the miner’s storage ask is a precondition, but not sufficient to ensure the deal is accepted - the storage provider may run its own decision logic later on.

Then data is transferred from the client to the miner.

The deal is published on-chain, via the PublishStorageDeals message, making the storage provider publicly accountable for the deal.

Once the deal is published on-chain, it is handed over to the Storage Mining subsystem, to pack into a sector which is later sealed, and subsequently proven continuously.

The Storage Mining subsystem ensures miners can effectively commit storage to the Filecoin network and:

It oversees the following processes:

In order to register a sector in Filecoin, a miner must seal the sector. Sealing is a computation-heavy process that produces a unique representation of the data in the form of a proof, called Proof-of-Replication or PoRep. Once the proof has been generated, the miner compresses it and submits the result to the blockchain. This is a certification that the miner has indeed replicated a copy of the data they agreed to store.

Every storage miner must continuously submit proofs on-chain to prove that they continue to store their sectors.

Declaring storage faults and recovering from them (see Faults)

Failing to submit the proofs mentioned above for a given sector will result in a fault, and the miner will be subject to penalties.

As covered above, storage deals are published on-chain before they are active and sealed. This is important because publishing a deal locks clients’ funds in escrow on-chain. Thus, the miner has assurance that if they do indeed seal the data in a sector, they will get paid for it.

It helps to think of publishing a deal on-chain as signing a contract, and of sealing and activating a deal as starting to do the work the miner committed to.

From the perspective of a client who wants to store data on Filecoin, the deal passes roughly through the following stages:

From the perspective of a miner who provides a service to the client by storing their data, the deal passes roughly through the following stages:

Retrieval deals, unlike storage deals, happen mostly off-chain facilitated by payment channels. Data transmission is metered, and the client pays the miner incrementally as the data is being transferred. Creating payment channels, and redeeming vouchers, is the only part of the process which involves interacting with the Filecoin blockchain.

This is the overall process:

The client has not successfully retrieved a full copy of the data.

The sections above glanced over many details that make Filecoin unique and provide probabilistic guarantees on data to users. This section covers two of the proofs that Filecoin utilises, and also explains how they fit into the protocol and the problems they address.

Proof-of-Spacetime (PoSt) is a procedure by which a storage miner can prove to the Filecoin network they continue to store a unique copy of some data on behalf of the network.

Winning Proof-of-Spacetime (WinningPoSt) is the mechanism by which storage miners are rewarded for their contributions to the Filecoin network. At the beginning of each epoch, a small number of storage miners are elected to each mine a new block. As a requirement for doing so, each miner is tasked with submitting a compressed Proof-of-Storage for a specified sector. Each elected miner who successfully creates a block is granted FIL (a block reward), as well as the opportunity to charge other Filecoin participants fees to include messages in the block.

Storage miners who fail to do this in the necessary window will forfeit their opportunity to mine a block, but will not otherwise incur penalties for their failure to do so.

Window Proof-of-Spacetime (WindowPoSt) is the mechanism by which the commitments made by storage miners are audited by the Filecoin blockchain.

Every storage miner should maintain their pledged sectors. These sectors contain deals made with clients or empty sectors. The latter are called committed capacity, that is, miners can make capacity commitments, filling a sector with arbitrary data, rather than with client data. Maintaining these sectors allows the storage miner to provably demonstrate that they are reserving space on behalf of the network.

Every day is broken down into an array of windows, currently 48 windows, with a duration of 30 minutes (60 epochs, since 1 epoch is equal to 30sec)

Each storage miner’s set of pledged sectors is partitioned into subsets, one subset for each window.

Within a given window (30min), each storage miner must submit a Proof-of-Spacetime for each sector in their respective subset. This requires ready access to each of the challenged sectors, and will result in a zk-SNARK proof published to the Filecoin blockchain as a message in a block. In this way, every sector of pledged storage is audited at least once in any 24-hour period, and a permanent, verifiable, and public record attesting to each storage miner’s continued commitment is kept.

In the diagram above, you can see that a sample miner should submit WindowPoSt proofs in deadlines 0 (> 16TB), deadline 1 (< 8TB) and deadline 2 (< 8TB), with the majority of their sectors falling in deadline 0. Deadlines for each miner are randomised, and for this specific miner, start respectively in epoch 1635, in epoch 1695, and in epoch 1755. You can inspect these deadlines and more details about miners on the SpaceGap tool.

The Filecoin network expects constant availability of stored data. Failing to submit WindowPoSt for a sector will result in a fault, and the storage miner supplying the sector will be slashed. This incentives storage miners for healthy behaviour.

A fault occurs when a proof is not included in the Filecoin blockchain within the proving period, as a result of loss of network connectivity, storage malfunction, or malicious behaviour.

When a fault is registered for a sector, the Filecoin network will slash the storage miner that is supposed to be storing the sector; that is, it will assess penalties to the miner (to be paid out of the collateral fronted by the miner) for their failure to uphold their pledge of storage.

There are three types of sector fault fees:

This post covered some of the concepts related to storing and retrieving data on Filecoin, the protocols that clients and miners engage in to make that happen, and the different proofs and guarantees involved in the process.

It detailed the flow for storage and retrieval deals from the perspective of clients and miners, as well as the penalties that the Filecoin protocol would enforce in case one of the parties misbehaves.

To conclude, it outlined some of the foundations of how the Filecoin protocol governs the Filecoin network resulting in a reliable and trustless decentralised storage network.