The Evolution of a Lotus Node

All the talks from the summit were made available on the Filecoin Channel.

In April’s Retrieval Market Builders Mini-Summit, Raul Kripalani (libp2p and Filecoin core dev) led a deep dive on the architecture of a Lotus node and the changes planned, specifically to the lotus-miner nodes, to better fit the needs of miners and network participants. The full talk is available here. The talk aimed to highlight the work needed to ensure retrieval deals were highly reliable and scalable for Lotus miners - helping ensure a Filecoin retrieval market would build on a robust foundation.

The Evolution of a Lotus Node

The Filecoin ecosystem is moving quickly, and ecosystem tools like Lotus are constantly evolving to meet the needs of the network and experiment with future opportunities. Retrieval markets in particular will introduce new capabilities to the Filecoin network, including indexing, CDNs, public retrieval, and more.

The issue we have identified is that these new retrieval market capabilities will rely on a robust miner foundation - and today Lotus miners tend to work around certain features they find either unstable or unprofitable. At the end of the day, this is good behavior to witness from miners; it helps the Lotus implementation evolve to meet their needs. When network participants start short-circuiting certain features, it indicates that the software itself should be providing more flexibility and modularity to its users.

Through this observation, we realized that Lotus’ monolithic binary was preventing flexible and robust operations for Lotus miners, and identified opportunities to address the problem.

So far, the architecture of a Lotus node has been largely monolithic. There are two distinct entry points to Lotus: 1) a full node, and 2) a miner. However beyond this, network participants have very little optionality for which responsibilities in the storage lifecycle to take on. Miners, for example, are tasked with mining, proving storage, deal making, and more. These are fundamentally different responsibilities, but they are coupled together by the current lotus-miner architecture.

The Problems with Monolithic Architecture

Broadly speaking, this monolithic architecture precludes miners from effectively allocating their resources between discrete responsibilities. Forcing combined responsibilities contradicts the core motivation of miners, which is to maximize profit while minimizing operational risk. Specifically, there are a number of problems with the monolithic binary.

Fragility: bugs in one area can leak and impact other critical processes when there is no segregation within the architecture. This makes it difficult to segment between critical and non-critical processes, and opens up the entire instance to crashing.

Increased attack surface: certain processes of a Lotus miner require exposing public endpoints, which opens up that portion of the system to vulnerabilities. If the architecture is monolithic, a single public endpoint can jeopardize the entire system.

Feature bloating: within Filecoin’s mission, miners not only store and serve raw data, but they provide useful services on top of it, such as indexing, discovery, and more. Overloading a single process with new miner-side features causes further apprehension and operational risk.

Lack of fine-grain control: because miners cannot actively opt-in or opt-out of features, they have to work around them through mechanisms such as refusing deals, setting high prices to dissuade deals, or even forking the codebase.

Slower iteration: a monolithic architecture means it’s more difficult to test and innovate, because there exists no easy way to segregate new components and opt-in to an experimental feature without bringing it into the entire system.

Towards a Modular Miner Architecture

Looking at the responsibilities of a Lotus miner under the hood, two distinct categories emerge: mining operations and markets. These two layers share very different services and SLAs. For example, the mining operation of a Lotus miner is its most economically profitable activity, and also private in nature. The market operation, however, is entirely public and operates under different profitability models. 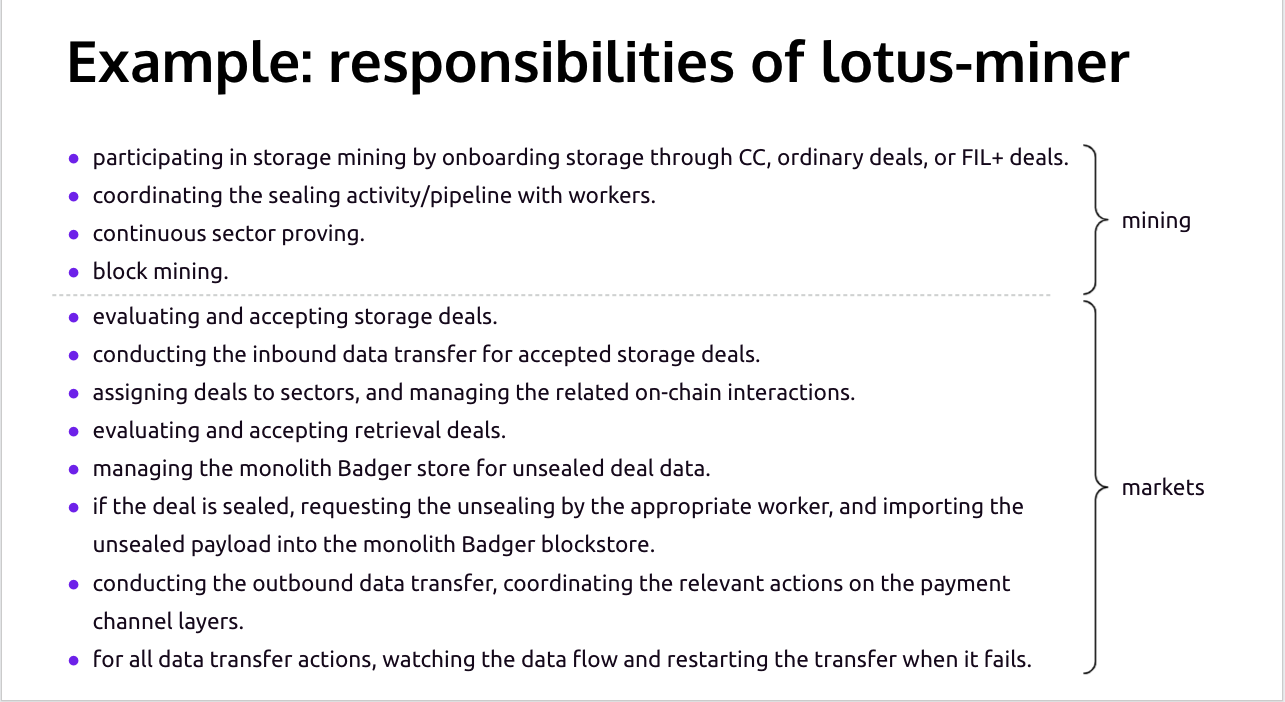 By separating markets and mining, the architecture of a Lotus node becomes more feature-specific for miners, allowing them to align themselves with the responsibilities that best fit their capabilities and their economic preferences for the network. 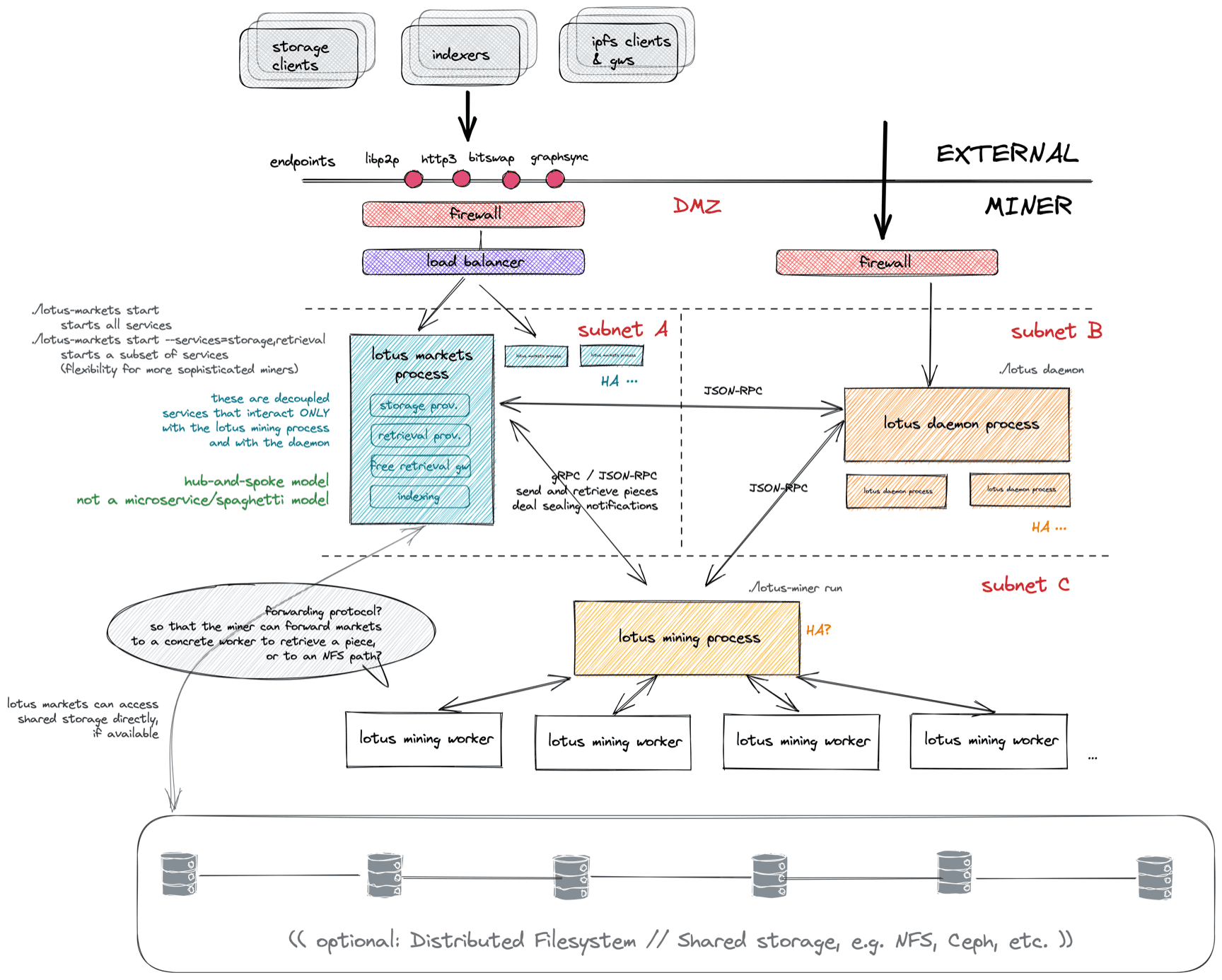 While proceeding down this new path towards a more modular miner architecture, Lotus will continue to uphold a number of design principles:

Avoiding microservice architecture-like complexity: explicitly avoiding complicated webs of interdependencies that quickly translate into spaghetti architectures and require specialised tools like service meshes to govern and debug. This is the wrong level of complexity to introduce to Lotus. Order and hierarchy still belongs, as these processes are still part of a single cohesive unit

Simple hub/spoke architecture: Lotus is moving towards a hub and spoke architecture, which is governed by supervisor instances. These supervisors know which capabilities are provisioned in the deployment and which nodes offer them. They also serve as the external API entrypoint into the aggregate. 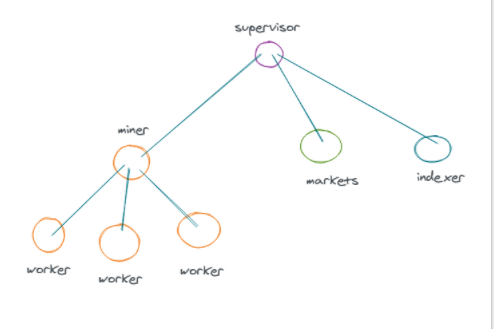 Robust distributed process lifecycle supervision: a modular architecture cannot mean an entirely isolated one. If something fails and it means other downstream services are going to fail, then the entire system must be able to notice and react.

To design this new runtime, we are inspiring ourselves in models like Erlang/OTP and actor-oriented programming (e.g. Akka in the JVM world), and borrowing select concepts and abstractions from service meshes and orchestrators, without actually relying on those frameworks wholesale.

To learn more about Lotus and the path towards a modular miner architecture, see: