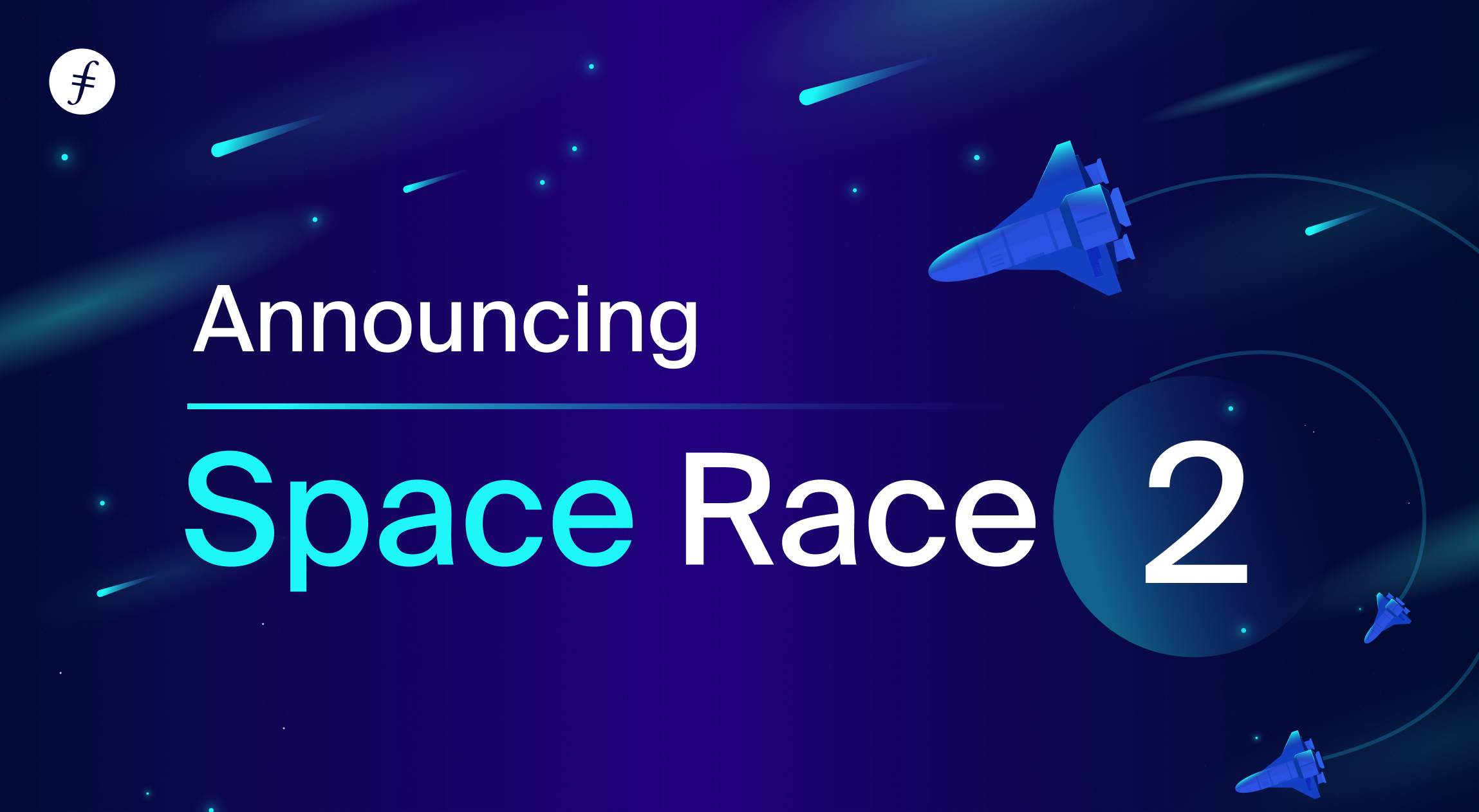 For the past 3 weeks, miners across the community have been participating in the Filecoin Space Race to onboard as much storage as possible to the Testnet. We’re thrilled by the amazing engagement and participation in Space Race. Over 356 miners from 32 countries across all 6 continents have participated - including miners from Nairobi, Kenya - to Auckland, New Zealand - to Sao Paulo, Brazil - to Oslo, Norway - to Shenzhen, China.

Participation has far outpaced initial expectations, with miners quickly approaching 200 PiB of storage — 2x the original competition target! Even more importantly, the Space Race has enabled massive upgrades to the Filecoin protocol and early implementations. The fast rate of data onboarding during Space Race helped identify improvements to chain throughput, data sealing resilience, message pool spam protection, and worker selection logic to help Filecoin support even more miners and data capacity. We also made significant optimizations to the deal-making process as part of learning from the thousands of storage and retrieval deals that competition storage bots made each day – along with adding many new APIs, better defaults, and monitoring tools to improve miner usability. You can find out more about all the exciting happenings of SpaceRace by watching the weekly reports and other events.

One of the main goals of Space Race was to prepare the Filecoin network and operators for the levels of usage, traffic, and performance we might see over time on mainnet. The final week included important stress-testing procedures for the network, including chain upgrades, drand outages, and state updates. Preparing everyone for these sorts of real-world challenges helps the network handle situations smoothly – this will make the Filecoin mainnet stronger and more resilient. We learned a lot from these stress tests as a community: how much time we needed to do a coordinated consensus upgrade, what tooling we need to make these upgrades easier, and how operators can recover from problems swiftly and safely. We now have version dashboards, checkpoint follow logic, and snapshot export tooling thanks to this testing!

Huge thank you to the entire community for such a phenomenal competition so far. We’re honored to be building this network alongside you — here’s hoping we hit the epic 200 PiB milestone and reward tier! 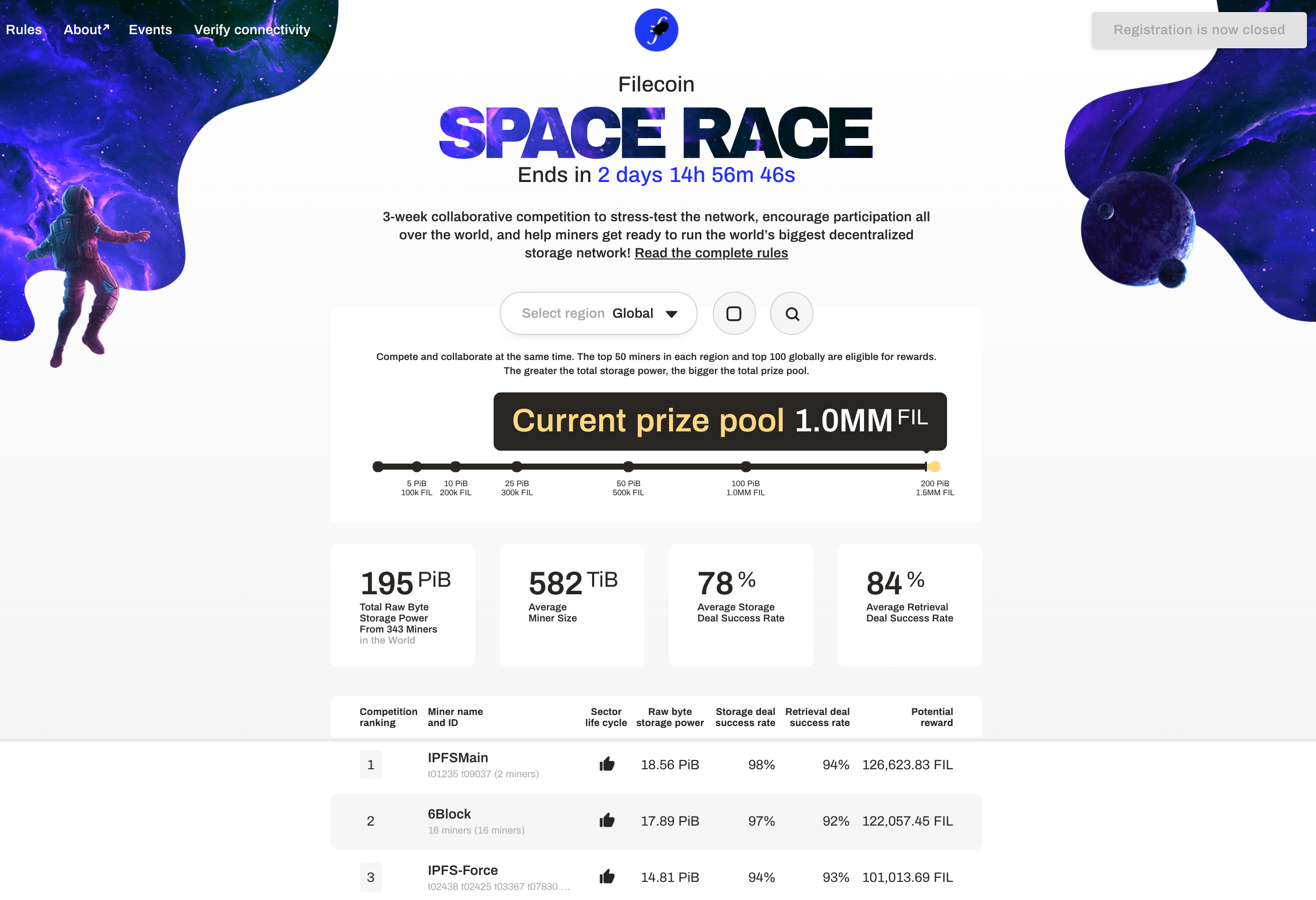 Bringing the Community Together

The community response and conversations have been amazing! We have seen and heard from hundreds of people participating in the Space Race, from all over the world. Miners have written dozens of blog posts, participated in 3 AMAs, and 9 Filecoin Miners have presented at 3 Show-and-Tells. Over 1,205 community members are active in the #space-race Slack channel, producing an ocean of discussions about all things Filecoin. 11 especially helpful people won Community Awards for their great contributions. The community participation and momentum is amazing! 🚀

Participants have generated a ton of great feedback throughout Space Race, leading to many lotus features, protocol adjustments, chain explorer improvements, new tools, and much more. Your thoughts and feedback are valuable, as they guide the project and guide the development of many products across the ecosystem. Some of the requests point in conflicting directions – entirely normal in large blockchain communities like ours. But the data also shows some strong common themes.

Among the many insights and feedback, five big requests led to this post today:

Now, doing another Space Race is asking a lot of the miners, developers, and Space Race staff – many of us are exhausted after 3 fast-paced and intense weeks! The Space Race has been a huge and challenging undertaking for everyone. Miners had to build and run their entire operations, learn how everything worked, improve and optimize their operations, gracefully manage problems and stress-tests, and more. We developed lots of custom software, created competition programs, put on events, staffed the channels 24⁄7 to help people get started and problem solve, and so on. These programs take significant time to plan, put on, and participate in. However, given the valuable opportunities and the strong requests, we decided to give the community what they asked for. ❤️ 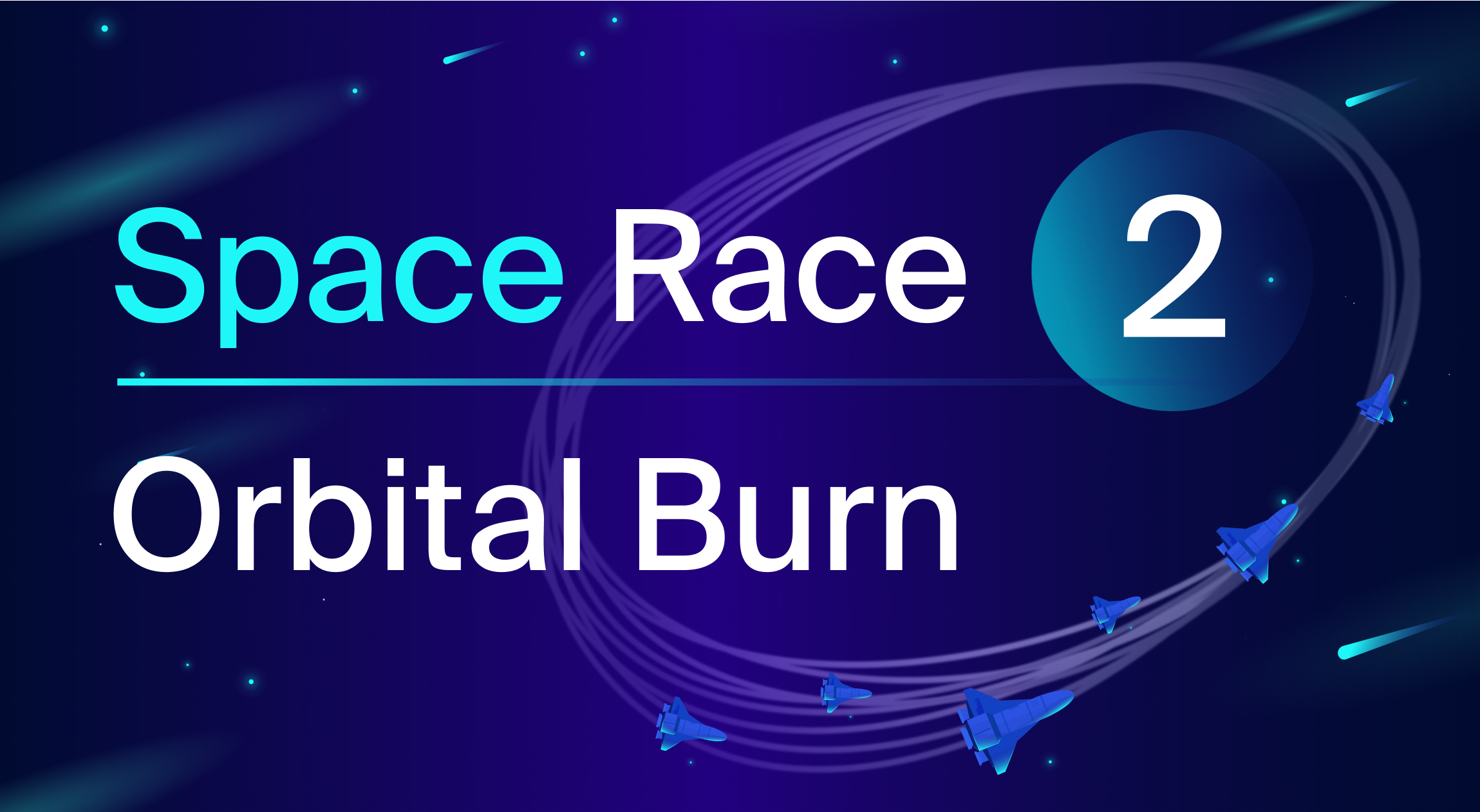 We’re excited to introduce Space Race 2 (or SR2)! Based on all the feedback, we decided to create a second phase of competition building on the massive network grown during Space Race so far. This gives us an opportunity to continue testing and improving Filecoin on a network at scale, as we prepare for mainnet.

Domain Tracks. SR2 will be a competition with domain oriented tracks. These tracks let different subsets of the community exercise & test different parts of the network.

In SR2: Orbital Burn, storage miners will receive additional rewards for maintaining and growing their storage. However miners will not need to race towards large storage targets to increase prize pools in limited time. This structure lets miners grow their storage at their own pace. We hope this gives teams time to rest & regroup as they need after the intense competition of SR1. Here is a preview of SR2: Orbital Burn competition rules. The final rules will be posted on the website.

Thank You for Participating

We have often hoped to include Space Race storage in mainnet to support initializing the network with large amounts of useful and well-decentralized storage power. We hope that SR2 will achieve this and stress-test even more pathways, including economic incentive conditions much closer to those expected in mainnet.

Thank you very much for participating in SR1. It has been a fantastic and rewarding experience for all of us, and we have accomplished great things together. We have amassed nearly 200 PiB of storage via a decentralized storage network, powered by a novel blockchain!! We have created a tremendously large distributed storage facility. Though not yet as large as the large centralized cloud companies, we’re well on our way – that is our challenge for the coming years.

Good luck as we reach the end of SR1! And good luck with SR2!